A scale weighs out coffee in Dili © Brie OKeefe

Yesterday was our photographer Marcus’ last day in Timor, and we spent the morning bustling about to get some last key shots before we deposited him on the plane, and got down to the busy business of transcribing and organizing the interviews we’ve done, recording the names we’ve met, backing up files incessantly before heading to Bali on Saturday. Through a small miscommunication, we believe we’re heading to Yayasan Hak, a local Human Rights NGO to take a photograph with Julinho, a survivor of the Santa Cruz massacre, and a medal given to him by the Timorese government for his involvement as a Youth in the struggle for independence. But we realise we’re going in the right direction.

“But you said you wanted coffee!” said Chico, as we pull into what appears to be an abandoned warehouse in a large industrial yard. Its true, Marcus and I had expressed the desire to pick up some Timorese coffee to take back, but that was only time permitting, and since we’d been told it was only possible to buy green unroasted beans OR ground coffee, we weren’t really that keen. Although all of us wanted to make sure we could get those final tasks done before the flight, we were already here, and so we cut our losses and headed inside the darkened warehouse.

Beneath the rusted panels making up the walls of the warehouse, we enter a dark room filled with gigantic sacks of unroasted coffee beans – burlap sacks traditionally used in the West as decoration on the walls of expensive coffee houses. Seeing “Café de Timor Leste” printed on the side of a giant sack actually filled with beans in such a primitive setting brought home where our ‘decorations’ were actually from.

The warehouse was made of three rooms and was run by a staff of 2. The first room we had entered was where green coffee beans were weighed and measured from giant unweighed holding sacks into sacks holding precisely 100kgs. He tells us coffee is hand sorted in East Timor, with larger beans separated from smaller by workers in the countryside before it is brought here. 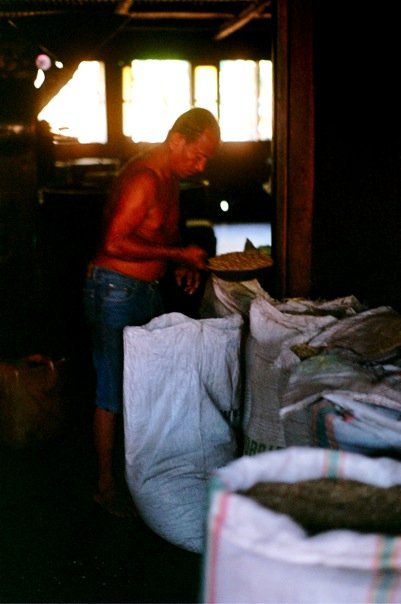 Before roasting, coffee is weighed into large sacks © Brie OKeefe

To the right of this room is where the roasted coffee is kept in individual bags holding 1kg of 500g. It is sold roasted or whole, and the whole room gives off the most inviting odour. Despite the remote location, and the lack of any sign on the building either Tetum, Portuguese or Bahasa Indonesia, we quickly see that his room is a buzz of activity, as people drop in regularly to buy freshly roasted coffee to take to their homes or offices. The shirtless man at the desk tells us all the coffee we have bought was roasted yesterday, and we are practically drooling at the gorgeous chocolately smell of it.

It is beyond this room, that we see the most fascinating part of the warehouse – the roasting room. Standing at two opposite ends of the long room lie two ancient, and formidably large coffee roasters. A man dressed only in tiny shorts with a large cloth draped over his head squats before one, scraping stray coffee out from under it, and generally maintain the beast of a machine. All of these rooms are lit only through light that pours in through the windows, and there is ancient feel to this place, with all the machines standing in an eerily still and quiet form, its difficult to imagine them whirring to life with the flick of a switch. In fact, I find it hard to believe this place even has electricity to power these machines. 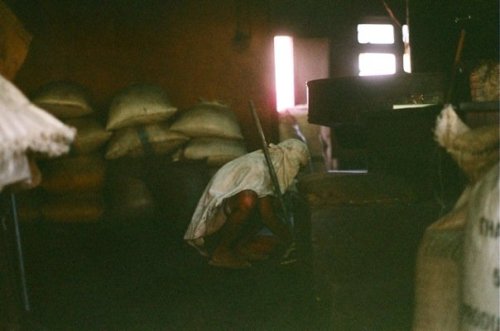 Nevertheless we buy several bags of coffee and leave. Marcus, as a child in a candy store, can barely contain his glee at the coffee, and quickly creates a device using the packaging where he can inhale great whiffs of the coffee as we drive towards our next assignment, discuss in detail how exactly he will grind and prepare it once we get back to London. We sheepishly thank Janu, our driver, for the wonderful if unscheduled stop, and head on to our next assignment, having had a brief moment at playing tourists in Timor.

This entry was posted in Stories from the ground. Bookmark the permalink.